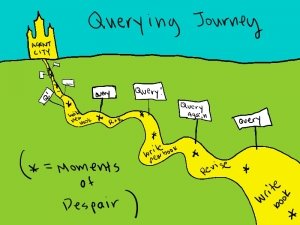 In the previous post I discussed what querying is and how to do it, while in this post I will explore some tips about how to query successfully, and what not to do.

Firstly, keep in mind that the things you want to convey in your query letter are:

1) Professionalism: read and re-read your query letter for any editing mistakes, and then have a friend or fellow writer also proofread it for you. One surefire way to send your query straight into the shred pile is with a big, glaring grammar mistake. If there’s a few discrepancies in the entirety of your manuscript that’s one thing, but to have a mistake in the one-page letter you’ve sent does not fill an agent with confidence. Also in the vein of professionalism; be sure to spell the agent’s name correctly and address them appropriately.

2) You’ve done your research: make it clear that you know who the agent is that you are querying, and why you’ve chosen them specifically. For example, an agency I’ve become familiar with through Twitter is The Bent Agency, and one of the agents accepting queries there is Beth Phelan (she has also posted on Twitter in the past looking for slush pile interns, for those who might be interested). On Ms. Phelan’s page, it talks about what work she is accepting (YA and MG, literary adult fiction, etc.) and goes on to say “I am looking for complex fiction that pulls you in immediately, characters that you wish were your real friends and plot lines that drag you away from reality to a world you never want to leave. My favorite stories are told with humor and sprinkled with surprises.”

What’s great about Beth’s introduction page is that she has given a querying writer a lot to work with, in that you can maintain a professional voice but relate your manuscript to what she is drawn to, ie: “At 43,000 words, my MG novel Unicorns Are Real weaves a ‘tale’ of forgotten history when 10-year-old Jackson realizes his mini-horse, Mini, is actually the descendant of a royal line of unicorns destined to rule the world unless the evil gopher ruler, Lord Zani, gets to the throne first.”

In this hook line I made sure to state the genre and word count, and tried to evoke feelings of fantasy, comedic tones, and some plot twists—whether it was accomplished in the two minutes I took to write it remains to be seen.

Now, it wouldn’t be appropriate to send the Unicorns are Real query to someone who is only accepting cookbooks, or even someone who is accepting epic fantasy—which is normally in a word count of around 100,000 or more. The thing about querying agents for traditional publishing is this: there are a lot of submission guidelines to follow, and they were put there for a reason. These agents receive upwards of a hundred queries a day, and you increase your chances significantly of being considered by following these simple rules: that you query an agent who represents your genre, convey to the agent quickly that you’ve done the research to support that, and ensure that the letter is error-free.

3) Personality: Many websites say that it is important to follow the submission guidelines of a particular agent or agency exactly, and I agree with this. That doesn’t mean that your query letter cannot still convey the personality of your piece, and your specific voice as a writer. As I mentioned in the previous post, it would be prudent to write with a style that fits the genre of the manuscript you are querying, as well as your own personal flair (is your MC a snarky fifteen-year-old or an 18th century vampire? Make sure that every word chosen evokes those specific undertones).

Finally, here’s a comprehensive list of things not to do when querying, from the resourceful Andrea Brown Literary Agency’s website:

“Don’t act unprofessionally at any time—even after receiving a rejection. That way the door is left open. Also, publishing is a small community in many ways. You don’t want to get a bad reputation or to burn bridges.”

“Don’t use gimmicks to get attention.”

“Don’t expect an answer too soon. Each of our agents receives hundreds of queries per month. Our agency has a tiered system of response, and also typically has two readers for projects we are seriously considering. It can take a while to get a response.”

“Don’t submit to more than one person at the same agency.”

“Don’t keep sending manuscripts to an agent who has declined your work unless the agent asked you to send more or unless a reasonable interval of time has gone by since you submitted your work and the work is significantly different.”

“Don’t send e-queries with a whole list of agents in the subject line. This is a big turn off. Multiple submissions are fine (say it’s a multiple submission), and you don’t have to individualize every query, but at least give the illusion of targeting the particular agent whom you are querying.”

Go to their website for more do’s and don’ts of querying; and here’s another link to their tips for publishing success: http://www.andreabrownlit.com/tips.php.