The Controversy of American Dirt: What Happened and What It Means

It’s no stretch of the imagination to assume that the unfavorable reception to the suspense thriller, American Dirt, that was released on January 21, 2020 came as a complete surprise to the publisher, their team, and the author Jeanine Cummins herself. Upon release the book was already on Oprah’s Book Club pick and New York Times bestseller in fiction. The controversy surrounding this book seems only to have led to higher book sales and general awareness of the title. However, the controversy of the book’s material and backlash following its publication still warrant some frank discussion about diversity, “trauma porn,” and why the predominantly Caucasian publishing industry is in many ways failing both authors and readers.

The Controversy of American Dirt 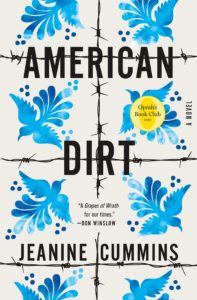 American Dirt first heralded as an industry favorite and hit the shelves at #1 for the New York Times bestseller list at the end of January. Soon after several scathing reviews came to light in the coming days that painted a very different picture from the early “blurbs” on the cover. Some of these blurbs included Stephen King, who called the book “extraordinary,” and Sandra Cisneros, who state it was “the great world novel” and an “international story of our times”.

The first review that wasn’t glowing in nature was written by Myriam Gurba and posted on the Tropics of Meta site in mid-December 2019. Originally commissioned to write the review on American Dirt for a feminist magazine, Gurba was told by an editor following her submission that she wasn’t “famous enough” to publish something so scathing. Gurba’s criticism isn’t to do with the fact that a Caucasian author wrote a story about a Hispanic character’s experience. It’s that the author clearly didn’t write with the influence and accuracy of someone who is truly informed regarding the experiences of the Latinx community. Perhaps most indicative of Gurba’s feelings about the book can be summed up in regarding the divide between the author’s assumptions and the true traits, mannerisms, etc. of those in the Latinx community.

“Cummins’ failure to approach death with appropriate curiosity, and humility [regarding Latinx sensibilities], is what makes American Dirt a perfect read for your local self-righteous gringa book club.”

Where Does the Industry Go From Here?

While this has certainly proven to be a grey-area issue with arguments and opinions from both sides, the general consensus seems to be this:

Authors are absolutely allowed to write from the perspectives of individuals unlike themselves—as long as they do it with sensitivity, in-depth research, and fact-checking to ensure that the representation in their book truly aligns with the experiences of that character’s (or group’s) perspective.

Authors should absolutely continue to accurately represent traditionally marginalized characters in fiction. The question of why literary agents, publishers, and the industry as a whole don’t just publish and support works from diverse authors with those actual perspectives remains unanswered. It’s one of the issues that Gurba—a renowned author in her own right, with awards and distinctions to back it up—brought to the forefront. As we become better informed and cognizant of troubling narratives like this one that can and should be avoided at all costs, hopefully this controversy will lead to positive changes in the industry in the future.

Midnight Publishing has been serving authors and entrepreneurs for nearly a decade with a myriad of editing, ghostwriting, and consulting work. Contact us today to see if we can provide the right professional assistance for your author journey!