Why The Doors’ John Densmore & Other Celebrity Authors Are Self-Publishing

We all know the reasons: over-eager authors churning out unpolished and unprofessional content, and a lack of understanding about the overall work involved, to name a few.

However, in the past five years, self-publishing outlets went from minimal to mainstream, and as of 2013 about 80% of books on the market were self-published or published by small publishing companies.

It used to be a path chosen by authors who could not get their books published in any other way; now it is a way for authors to retain control of their work and higher royalties. Authors also seem to finally understand that hiring an editor and book designer is crucial to retain authority with readers. I truly believe that while 2013-2014 gave way to the rise of self-publishing, 2015 will be the year of maturation (full disclaimer: I am a the founder of Midnight Publishing, a company that offers editing and self-publishing consultation to authors).

There has also been an array of best-selling self-published authors, which gives it a new level of credibility. While self-publishing has lots of pros, it also requires a substantial amount of work on the author’s part. For example, at the Writer’s Digest Novel Writing Conference in L.A. this past August, the literary agent panel advised authors that if you haven’t sold at least 10,000 copies of your self-published book within the first few months, they aren’t going to have any interest in signing that book.

Realistically, this is usually only accomplished if you have an immense marketing plan, or if you are a celebrity or distinguished person in society. Thus, people want to hear their story. And as of late, it seems to me that more and more notable figures with an established audience are opting for self-publishing.

A current client of mine is an ideal example of this model. A renowned cardiovascular surgeon regarded as a pioneer in the treatment of heart disease, his name is synonymous with many “firsts” in cardiovascular surgery. Within the past two decades, he has published several books with major publishers, and decided to take a different route for his memoir. Sick of losing so much creative control over his own writing, he opted to explore the realm of self-publishing. Midnight Publishing was happy to help.

Because this is the real reason behind self-publishing, right?

The former drummer of classic rock legends The Doors was offered six figures from a New York publisher for his 2013 memoir, “The Doors Unhinged: Jim Morrison’s Legacy Goes to Trial.” The publisher tried to change the name of his book, and wanted to focus more on Jim Morrison within the content. 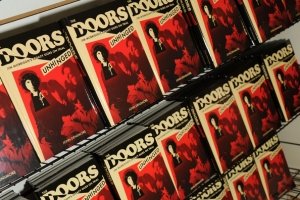 “They wanted to just destroy my baby and I thought ‘God, I just can’t do this,’” Densmore explained to me. “And so, yeah! It was a lot of work, but the ultimate control. I mean, down to the font! I could choose my own font size!” Laughter.

This is the drummer’s second book after his 1990 New York Times bestseller “Riders on the Storm,” which walks the reader through a history of the band. Densmore personally recommends the self-publishing route to other musicians, rather than pitching to a big publisher or literary agent.

“The hard part is the marketing,” he adds. “If you were a band trying to get going, how many videos are on YouTube? Trillions? And it’s great that with technology everyone can make their own CD or write their own book. But getting attention for it—that’s really difficult. You really have to try and think of ways to get it out there, 24/7.”

Read more about how Densmore wrote “The Doors Unhinged” here, including how he had to read through 20,000 pages of court transcripts.

The work of self-promotion will never go away, no matter who you are.

All in all, the biggest challenge for a self-publisher is just standing out from the crowd, as well as the investment (of time and money) for marketing and publicity, and an entrepreneurial mindset.

While Densmore’s name might have more of a “legendary” take on it for people, hundreds of other musicians are self-publishing with extremely successful results as well. More and more celebrities are finding that an offer from a major publisher comes with restrictions on their writing; which may mean changing their life story or the intentions of why they wrote their memoir in the first place.

Carla Harvey, a frontwoman of the heavy metal act the Butcher Babies, self-published her work of creative non-fiction “Death and Other Dances” in August 2014. She published the book on her own imprint, Pretty Girls Do Ugly Things.

“I didn’t have to self publish, but I felt it was the best thing for me. Publishers wanted me to change my story, saying that I should make it more Oprah’s Book Club-friendly,” explains Harvey. “At first I thought ‘okay’—but then I realized I didn’t want to change anything. This is me. Graphic, raw; this is how I want to stay. And it ended up being the best choice. I’ve gotten so many letters and emails from men, women and girls that said they completely identify with me. So that publisher was completely wrong.”

Read the review of “Death and other Dances” here.

Harvey admits that it has been a lot of work, but that self-publishing and having full creative control was very rewarding for her. In her mind, a larger publisher would have the book sitting on a shelf, and maybe it wouldn’t even be published for a few years.

“I want to reach beyond

[the current fanbase] to get fans of literature to read it as well; but that will come in time,” adds Harvey. “And I can always go with a publisher later for a second edition. So far I’ve had more success with the book than I could’ve hoped for!”

Midnight Publishing offers skilled and affordable media architects for manuscript editing, self-publishing consultation and guidance, and author marketing. The ultimate role of the editor is to help the author connect with the reader. A good editor enhances that connection, providing another eye and view for the author. Our editors are artists of language, grammar, and the mechanics that help a manuscript take the journey from ordinary to great. Midnight Publishing also offers self-publishing consultation, query letter editing, graphic and web site design, business copy writing and editing, and more.